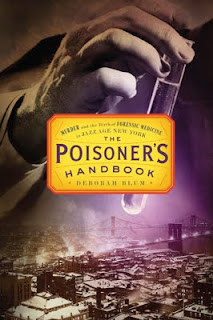 Contrary to what “CSI” and “Quincy, M.E.” might have us believe, science-based criminal investigation hasn’t always been a fact of life. In The Poisoner’s Handbook: Murder and the Birth of Forensic Medicine in Jazz Age New York, Deborah Blum tells the fascinating story of how forensic toxicology came to be — and how easy it once was to poison someone and get away with it. The heroes of her story are Charles Norris, who in 1918 was appointed the first-ever chief medical examiner of New York City, and Alexander Gettler, Norris’ toxicologist. Together, Norris and Gettler helped elevate and standardize the field of forensic medicine, with a particular emphasis on toxic industrial products such as arsenic, mercury, carbon monoxide, chloroform, and radium. How did they do it? Well, in 1922, there was this meeting:

That September Norris caught a train to Washington, D.C., to meet with representatives from other cities — a coroner’s physician from Chicago, a pathologist from Johns Hopkins, a chemistry expert from Cornell Medical College, and the revered medical examiner from Boston, George McGrath, who had created one of the first professional programs in the country. They agreed to form a committee, pool their resources, and hire someone to investigate the state of forensic medicine through the country — “the training and qualifications of the men performing this important work in the various large cities” — so that they could start setting some national standards.