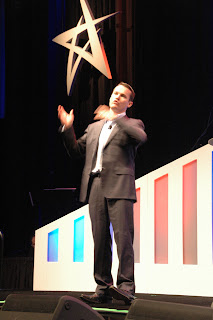 The problem, Sheahan said, is that many organizations have lost track of their own story; they’re overly beholden to their founding mission and their longtime members, and can’t really explain why they exist. “One of the biggest challenges facing you as an association executive,” he said, “is, based on your governance structure, you’re forced to meet the needs of members who have a legacy interest rather than the needs of members in the next five to 10 years.”

There’s a reason that Sheahan got a standing ovation from a bunch of jaded association execs when he was done. His presentation was dynamic and funny, and crackling with memorable insights. (My favorite: “Nine times out of 10, it’s the unsexy stuff where innovation happens.” Check out some of the Meeting Opportunity columns that Sheahan has written for Convene — here, here, and here.) Now allow me to divine some sort of trend in what both he and Tina Brown had to say about the power of narrative, and suggest that storytelling is the new sliders.

Believe me, I love sliders — those little sandwiches of goodness that began turning up on bar menus and at networking functions, what, five years ago? But these days, pretty much every single reception at every single meeting and event has some kind of slider: hamburgers, turkey burgers, Jamaican jerk beef, seared ahi tuna, corned beef, portobello, and on and on. It seems that meeting organizers are offering sliders because they feel they have to; because they think they’re essential.

As someone who thinks the world of a good story, I hope that storytelling — as a way to convey best practices, professional values, and more — becomes as ubiquitous at meetings and conferences as sliders, and just as tender, juicy, and satisfying.