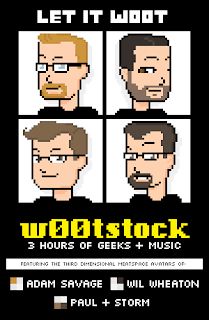 You might know Wil Wheaton as an actor — he played Gordie LaChance in the movie “Stand by Me” and Wesley Crusher on the TV show “Star Trek: The Next Generation.” And while he still does regular work on TV, lately he’s been much more active as a writer and speaker, especially on topics such as gaming, comics, and other geek pursuits. (Some of which, you may have noticed, are not unfamiliar to me.) Recently, he’s co-produced and co-hosted w00tstock, a three-hour “special event for geeks of every stripe” that last weekend was held in Seattle and Portland, and in coming weeks is scheduled to hit Montreal, Ottawa, Toronto, Chicago, and Minneapolis. Billed as “a night of songs, readings, comedy, demonstrations, short films, special guests, and other clever widgets,” w00tstock is especially notable for meeting professionals because it’s released under a Creative Commons license, meaning that attendees are free to record the show and pretty much do what they want with it. As Wheaton writes on his blog: “We want you to record the show, use your recordings to get excited and make things, and share them with the world.”

Is that the approach you take with the content at your meetings? If not, but you’d like to read a compelling argument about why you should, check out our interview with James Boyle, a founding board member and former chair of Creative Commons, and the author of The Public Domain: Enclosing the Commons of the Mind. And, on a related note, one of our recent Point/Counterpoint columns addressed the question “Should meeting content be available to anyone who wants it?”
So what do you think? Does your content want to be free?
Print