Until now, the @NYTimes Twitter account largely has been automated — simply auto-tweeting the headlines of and a link to whichever stories are published on the Times‘ website.

But for this week, social media editors Lexi Mainland and Liz Heron turned off the auto-tweeter, and instead have been “hand-writing” (as it were) all their own tweets.  So how has this experiment been going?  10,000 Words blog author Jessica Roy writes:

As it turns out, the differences between the automated feed and the handwritten one are pretty stark. For avid Twitter users, some of these changes may seem a little duh-worthy, but for a news organization with a notoriously ambivalent relationship with social media, these changes may represent an important attitudinal shift in regards to social networking.

Meaning?  Human-run Twitter feed are a lot more A) communal, B) interactive, C) fun, and D) useful.  Maybe something to consider for your association, group, meeting, or convention’s Twitter feed?

For comparison’s sake, here’s a screengrab of an automated portion of the NYTimes Twitter feed: 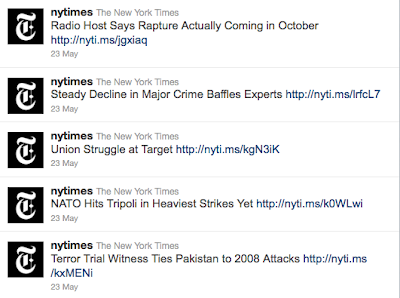 And here’s a screengrab of the human-run portion: 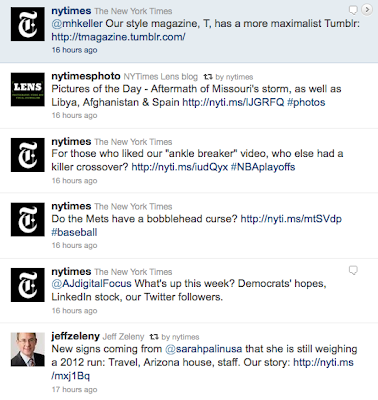