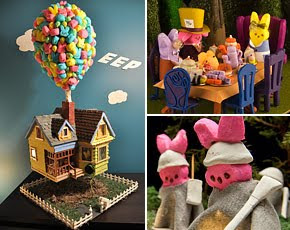 The keynote speaker at the 2010 AM&P Annual Meeting (have I mentioned that I helped plan it?) on Tuesday morning was Debra Leithauser, editor of The Washington Post Magazine. Debra is the first one to tell you that her lasting contribution to the Post thus far is the Peeps Diorama Contest, an Easter-timed competition that invites readers to use everyone’s favorite marshmallow-based zoomorphic candy as the basis of some kind of three-dimensional tableau. The results are insanely creative, insanely funny, and, in some cases, just insane.

Where did Debra get the idea for the contest, which she introduced to Post readers in 2007 when she was editor of the paper’s “Sunday Source” section, and which this year drew more than 1,110 entries? Oh, gee, Convene blog reader, where do you think? Of course it was at a meeting. In 2006, she attended the American Association of Sunday and Features Editors Annual Conference, heard someone talk about their paper’s Peeps contest, and was sold. “This is not necessarily high journalism,” Debra told AM&P attendees on Tuesday, “but it is high fun. And it’s a way for us to connect with readers.”