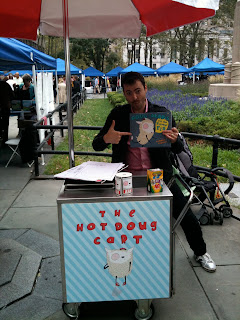 The 2010 festival, held last weekend, featured 200 authors of multiple genres — from Salman Rushdie to Sarah Silverman — and more than 175 exhibitors.

The booths, mostly tables under blue tents, were lined up on Cadman Plaza behind Brooklyn’s Borough Hall. In such a densely packed setting, how can any one exhibitor set him or herself apart?

Children’s book author Darren Farrell came up with a whimsical solution: His “Hot Doug” Cart, named after the wooly sheep who is the protagonist of Farrell’s children’s book, Doug-Dennis, and the Flyaway Fib. The Hot Doug Cart is the genuine article, a rolling hot dog cart, complete with umbrella. Farrell stashes books, crayons, and drawing paper in the food compartment. The sign on the front is simply a printed panel, which can be easily changed.

Sunday’s book festival was the cart’s inaugural appearance, and it attracted a lot of attention from children and their parents, beginning the moment Farrell popped open the umbrella. The cart fits inside Farrell’s Mini Cooper, he said, and he plans to take it everywhere a car will go — to libraries, bookstores, even setting up for impromptu reading on city streets and parks.

Farrell’s book — his first — came out in March. Before its debut, the author sat at a table to display books. The cart is much more fun for everybody.