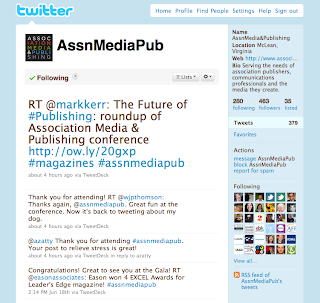 One final thought about the 2010 Association Media & Publishing Annual Meeting: A big priority this year was to involve AM&P members in general and Annual Meeting attendees in particular with the conference via social media — especially Twitter. As co-chair of the Annual Meeting Committee, I tried to set a good example by tweeting before, during, and after the event. During the actual three days of the Annual Meeting, I tweeted more than I ever have, firing off at least one takeaway — and usually several — from every session I attended. We were running a live Twitter feed of our hashtag in the exhibit hall, which was also the scene of every lunch, coffee break, and other networking event throughout the meeting, so a lot of people saw it, and were motivated to dive into the maelstrom of tweets, replies, and retweets. Some people even created Twitter accounts on the spot so they could join the conversation.

It was a great hands-on learning experience — a true living laboratory for social media — except that at a certain point I found myself listening to speakers not as an attendee who wanted to be educated but as a twitterer who wanted to entertain. I was focusing on sound-bite takeaways that would lend themselves to 140 characters (or fewer, ideally, so people would be encouraged to retweet me). When I realized that, I pulled back from Twitter a bit; instead of instantly tweeting every nugget that came my way, I took old-fashioned handwritten notes, and after a session wrapped up I tweeted whatever seemed tweetable. Maybe I cut myself off from Twitter’s instant feedback loop, but at least for a moment, it’s what I needed to do.