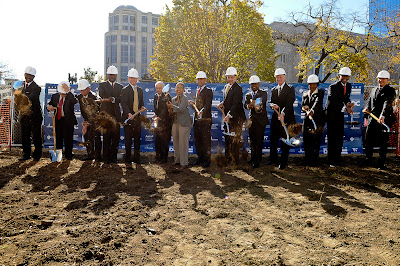 Technically, it was a groundbreaking ceremony for the long-delayed Washington, D.C., convention center hotel project, but really, Wednesday morning’s event could have been a local chapter meeting for Meetings Mean Business. Because almost every single one of the 13 VIP speakers on stage — from DC Mayor Adrian Fenty, to Mayor-Elect Vincent Gray, to Del. Eleanor Holmes Norton, to Marriott International Chairman and CEO J.W. Marriott Jr. — talked about the local economic impact of the 1,175-room, $520-million Washington Marriott Marquis property that is going to be built right across the street from the Walter E. Washington Convention Center.

That realization combined with the release of 20 years’ of pent-up frustration to create a lively party atmosphere at the corner of Massachusetts Avenue and 9th Street, NW. There, the Madison Lively Stones brass band played Dixieland music as hundreds of people filed into a tent built over a parking lot that soon will be home to a 14-story, LEED Silver-certified hotel with more than 100,000 square feet of event space. Soon the speechifying started, and no one seemed to mind, because there were a lot of thanks to go around, delivered amid what felt like a collective mood of giddy disbelief. 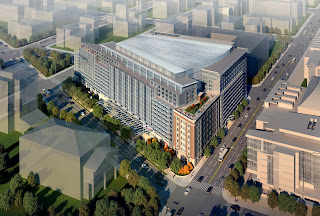 “This is a great day,” said Gray, who noted that over the last 19 years, the DC City Council has cast 24 different votes on the litigation-plagued project. “We had a wonderful convention center down on 9th Street, and we took the next step and built this magnificent facility. And now we’re taking the next step — and that is the step that will allow us to attract the next level of business, the next level of shows, the next level of conventions.” Added Norton: “The city’s tourism industry has done well considering the economy, so we should go for it. We should set a goal of doubling the convention business for the District of Columbia.”

The ultimate success of the project, according to Greg O’Dell, president and CEO of the Washington Convention and Sports Authority (WCSA), is due to the “three-headed monster” of a partnership between the city, WCSA, and the Quadrangle and Capstone development corporations. That and the people who will use the space once it’s completed in 2014. “It is really the customers that have stuck with us through thick and thin,” O’Dell said, “and not just sticking with us, but taking ownership of our city.”