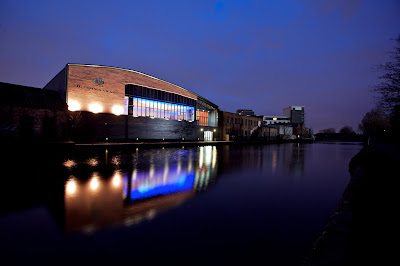 The press trip in which I’m participating stuck to London Eastside today, and as we made our way from Borough Market, to the East End, to Olympic Park, to Canary Wharf, we heard one story after another of something old that has become new, or something tired that has been refreshed. We began to get a sense of that yesterday, when we learned that ExCeL London was built on the site of the Royal Victoria and the Royal Albert Docks — the busiest docks in the world at one time, reduced to an industrial wasteland when they were selected as the side of the ExCeL project. And we saw plentiful evidence today as we toured the formerly downtrodden heart of working-class London, whose revival is most visibly symbolized in the huge Olympic Park project.

But maybe the best story reflecting Eastside’s spirit of evolution came from Lance Forman, managing director (and fourth-generation owner) of H. Forman & Son, the oldest salmon smoker in the United Kingdom, whose combination factory, restaurant, and event venue is pictured above. As Mr. Forman offered a tour of his facility — the closest venue to the new Olympic Stadium, which sits about 150 yards away — he pointed out a squiggle of purple paint that a local graffiti artist had blasted onto his warehouse. Recently, he said, organizers of the Hackney Wicked Art Festival 2010 asked him if they could use Forman & Son as a venue, and he told them that they could — provided that they identified the best local graffiti artists and had them decorate Forman’s restrooms. Two artists ended up spending a week painting striking graffiti-style murals in the facility’s men’s and women’s rooms. To me, this is a terrific form of CSR — Mr. Forman made a decision to ignore the graffiti marring his warehouse and to invite local artists to contribute to a business that is helping revitalize their community.

Perhaps equally important, we had lunch this afternoon at Mr. Forman’s eatery, Formans Restaurant and Bar, and it was rather amazing. But then, I would say that.