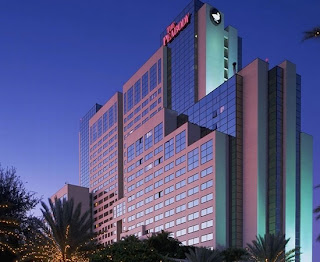 And there’s a lot of new stuff to show off — such as 300,000 feet of beautifully designed meeting and convention space, a 31-story guest tower, a high-end spa and fitness center, and a swank cocktail lounge that wouldn’t be out of of place on “Mad Men.” That’s on top of The Peabody Orlando’s existing portfolio, which includes a prime location next to the Orange County Convention Center and, of course, the ever-lovable Peabody Ducks.

But on a stem-to-stern tour this morning, Alan “Mr. V” Villaverde, CHA — president of Peabody Hotels and managing director of The Peabody Orlando — seemed most excited to take us backstage, through the hotel’s triple-wide service corridors, its NFL-sized kitchen, and, most especially, its Rube Goldberg contraption of a laundry room, where staff demonstrated the automated and/or computerized equipment they use to clean, dry, and press thousands of pounds of linens a day. When you’ve been in the business as long as he has, Mr. V told us, “sometimes it’s the little things that get you really excited.”

Plus, he said, about 80 percent of The Peabody Orlando’s 1,200 employees are back-of-the-house, so if you really want to understand how the hotel works, you have to go behind the scenes. Certainly that’s something that meeting professionals — who work in the invisible industry — can appreciate.