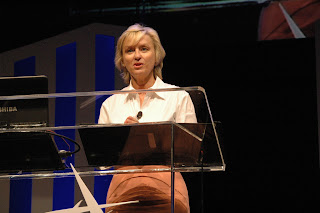 Tina Brown is probably the most famous magazine editor in the world — maybe the only famous magazine editor in the world — having served memorable tenures heading up Vanity Fair, The New Yorker, and her own Talk before launching The Daily Beast website and then merging it with Newsweek. But as she talked about her experience transitioning from print to online publications during this morning’s opening general session at ASAE’s Annual Meeting & Exposition at America’s Center in St. Louis, Brown might well have been speaking as a meeting planner. Because two of her big takeaways had no small relevance for our community:

1. Story matters. “Media is always about telling stories,” Brown said. “You have to make everything as personal and connected and news-driven as you can.” Later, she said: “The only thing that matters is telling a story clearly and cleanly.” Forget that she’s talking about journalism, and imagine instead that she’s telling you about something you know your attendees respond to: storytelling. Making the information and knowledge you share with them — and they share with each other — memorable by making it human.

2. Online drives traditional. Brown launched The Daily Beast in 2008; the following year, she created a Beast-backed conference called Women in the World: Stories + Solutions, because “I’ve always been a major believer in live events if they’re fueled by a powerful purpose.” And earlier this year, she became editor in chief of Newsweek, and merged the all-but-imploded weekly magazine’s news-gathering and news-writing operations with the Beast‘s. The result has been a revitalized, refocused Newsweek. What does that tell you? That old and new media are neither mutually antagonistic nor mutually exclusive; ditto face-to-face and virtual meetings. “The web can be so incredibly powerful about generating new ideas,” Brown said. Thanks to that, the Beast is “now a multimedia effort that can aggregate an enormous amount of attention around a project.”