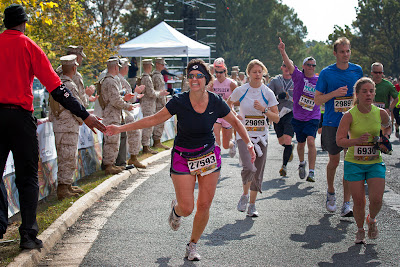 On Saturday, Jon Stewart and Stephen Colbert’s Rally to Restore Sanity and/or Fear pretty much shut down the Metro system and defeated our best efforts to get there, although we know a lot of people who did make it down to the National Mall. Following their updates on Facebook and talking to them later didn’t exactly make it feel like we were there, but it did contribute to a sort of party atmosphere throughout the weekend.

The rally only lasted three hours — from noon to 3 p.m. — but its spillover effect was enormous, especially since it bled over into the setting-up period for yesterday’s Marine Corps Marathon, which not only maxed out Metro but also closed down roads throughout the area as the marathoners made their way along the 26.2-mile course in Arlington and D.C. We had friends and family in town to run the race, so we all cheered them on at a mile marker near our house, and then my wife and sister-in-law split off to continue following them, all the way to the finish line at the Marine Corps War Memorial.

It was exciting and exhausting, and quite something to see two huge, professionally planned, nationally covered events go off so smoothly, and to feel some sort of connection to both. And Halloween was the perfect cap — yet another big splashy event that everyone seemed to be doing, but family- and neighborhood-oriented, where all you had to worry about was whether your own kids were having a good time. Substitute “attendees” for “kids” in that last sentence, and it become a pretty good distillation of the entire profession of meeting planning, no?