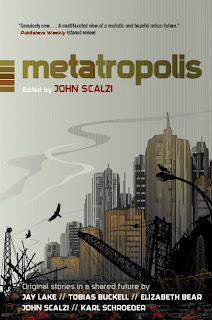 How do I know? I just finished reading Metatropolis, a collection of short stories, edited by John Scalzi, that explore how urban environments might evolve — and devolve — in the coming decades and centuries. In one of the stories, “To Hie From Far Cilenia,” by Karl Schroeder, people are able to use other people as their flesh-and-blood avatars — called “cyranoids” — anywhere else in the world. One of Schroeder’s characters, who physically is in Stockholm but who has been living in an “augmented reality” city called Oversatch, describes using a cyranoid in Brazil:

“It was in Sao Paolo. You know Oversatch has been sponsoring me to attend conferences, so I was riding a local cyranoid  at an international symposium on vanishing rain forest cultures. We were off in a English breakaway session with about ten other people, some of whom I knew — but of course I was pretending to be a postdoc from Brasilia, or rather my cyranoid was — you know what I mean.”

So not only will there still be physical conferences when everything else in the world is virtual, there will still be breakout sessions. Comforting, no? But you might want to start thinking about specific programs to accommodate cyranoids at your next meeting.