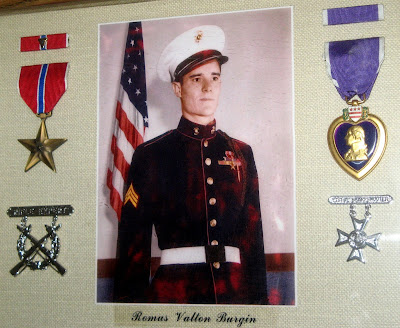 HBO subscribers might recognize R.V. Burgin, a Marine Corps veteran of World War II in the Pacific from the 10-part mini-series “The Pacific,” which is currently airing on the network. (Burgin shows up in episode four, set to air this coming Sunday, April 11th.)

The mini-series is based on several veterans’ memoirs, including Eugene Sledge’s With the Old Breed and Robert Leckie’s Helmet for My Pillow. Burgin published his own memoir last month, called Islands of the Damned: A Marine at War in the Pacific. It was written with retired Dallas Morning News feature writer Bill Marvel, and is available from its publisher, Penguin USA, or Amazon.com.

The book is gripping and personal, while the mini-series (produced by Steven Spielberg and Tom Hanks, who also was behind the popular World War II European-theater mini-series “Band of Brothers”) is wide-ranging and edge-of-your-seat intense.

But one thing neither the mini-series or the memoir gets across is the folksy pleasure of listening to Burgin tell his own story — which I was lucky enough to do … and now share with you here.

Click “play” on the media player below to hear Burgin tell what it was like growing up “in the Depression days.” Throughout this month we’ll be posting more clips of my interview with Burgin (along with, as soon as it’s posted, a link to the online edition of this Leading by Example): of him reminiscing about his Marine Corps training (in which a drill instructor tells him, in no uncertain terms, “how the cow ate the cabbage”); reliving firefights on New Britain, Peleliu, and Okinawa; and returning home to Texas to marry, work for the Post Office, and raise four daughters — all with as much good humor and stoicism as he displays in this audio clip.