Goldberger also shared his top two favorite places in New York — which turned out to be not buildings at all, but Central Park and the Brooklyn Bridge — as well as his views on “starchitects,” the function of memorials in American culture, and the transforming power of architecture. 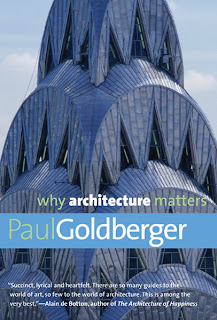 The evening made me think. About the built environment of New York City, but also about the parallels between events and buildings, how meetings can be seen as structures for creating community. They can play a role — if a much more temporary one — similar to that of architecture in shaping our social environment and interactions with each other.
Goldberger appeared at the museum as part of the “Tenement Talks” series, which occur every week, and sometimes more often. The events are far from fancy — participants sip inexpensive wine from plastic cups, and sit on folding chairs. The main thing, however, is talk — the series brings in an fascinating array of authors, academics, artists, and performers to speak about everything from historic waterfront strikes to Jewish cooking to Civil War history.
I love the museum, but I became a member because of Tenement Talks — even though admission to them is almost always free.   I want to support them, because they connect me to people who share my interests.
Goldberger’s 2009 book, Why Architecture Matters, has just been released in paperback. One passage in particular struck me as having relevance to the challenges faced by meeting organizers wondering how to measure the value of creating opportunities for people to come together:

Architecture … is the making of place and the making of memory. The urban impulse is an impulse toward community — an impulse toward being together and toward accepting the idea that however different we may be, something unites us. But what do we do in an age when every force pushes us away from cities, pushes us apart rather than together? And how we we make valid, lasting memory when it becomes so easy not to see the familiar, when we take it for granted and no longer even notice it? … We have to think hard about how the experience of being together will come to pass and how architecture can express a sense of community, a sense of common ground …

Architecture represents the real, and is ever more precious in an age of virtual. Every piece of architecture is an opportunity for real experience.

I could have stayed home and read Goldberger’s book, or hoped the museum would archive the talk. But I went and had an experience that I will remember.