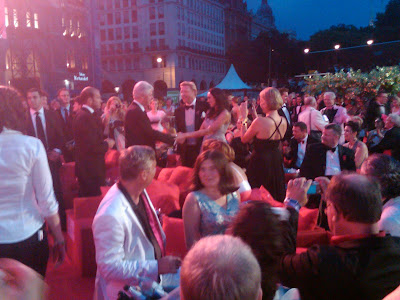 “Have you ever heard of an event that began as a labor of love, a passion project created and staffed by a single dedicated volunteer, that has made the leap to professional stage, with paid staff members, sponsorships, and so on?” one of my editor asked.

Well, yes, Chris, I attended just such an event last night — the 18th Annual Life Ball, one of the most glittering and spectacular charity events in Europe. I’m here in Vienna as a guest of the Vienna Convention Bureau and Vienna Tourist Board, representing the North American meetings industry trade press, along with meetings industry media from the U.K. (Martin Lewis of CAT publications), Italy (Marco Biamonti of EDIMAN Srl.), Germany (Kerstin Hoffman of T&M Media), and Belgium (Marcel Vissers of Meeting Media Company).
The Life Ball — designed to “fight AIDS and celebrate life” — was organized and founded by one individual, Gery Keszler. His vision was to make the charity event part of the Viennese ball tradition, with a modern twist. What began as a small event from the gay community — the first Life Ball took place in 1993 with only two sponsors, and raised under 80,000 euros for the non-profit organization AIDS LIFE — last year raised more than 1.6 million euros, and has been embraced by worldwide celebrities and dignitaries alike. Former U.S. President Bill Clinton, whose Clinton Foundation Access Programs are dedicated to expanding access to care and treatment for HIV/AIDS in the developing world, has become a regular at the event. (That’s him in a photo I snapped on my BlackBerry last night.)
The spectacular ball takes place at Vienna’s glittering City Hall and includes a red-carpet, two-hour open-air celebration, which, unfortunately, was cut short by a thunderstorm last night. When the rain first started, thousands of guests threw on festive pink plastic ponchos donated by T-Mobile, happy to sit out the rain. But when lightening threatened, the festivities were cut short and guests made a beeline for the City Hall. (Takeaway for planners: pocket-sized plastic ponchos are a great idea and smart sponsorship opportunity for outdoor events when there is a threat of inclement weather.)
At the ball, we circulated throughout the beautiful Gothic building among throngs of wildly costumed attendees (this year’s theme was Earth). The Life Ball was even more spectacular this time around, serving as the kick-off to the 2010 International AIDS Conference, held for the first time here in Vienna and starting today. It will be the first time that I attend an international conference of this size — 25,000 attendees — and I’m looking forward to learning all I can about how this event moves the world forward in the fight against AIDS.
Print